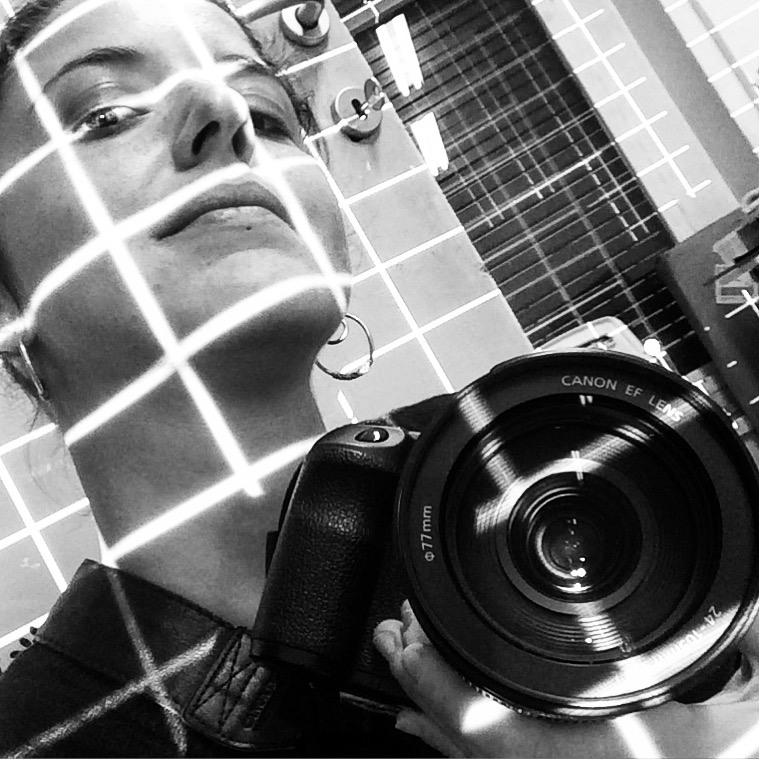 Malì Serena Aurora Erotico begins to transform her passion for photography as a profession in 2007, becoming a portraitist of musicians for albums covers and for the press. In 2014 she starts her collaborations with GVC  Onlus and Elefant Film production for which she did two photo features for the documentary “Eco de Femmes” about the condition of rural women in Maghreb.
Her photographs have been published in several newspapers and magazines, such as Repubblica, Corriere Della Sera, Espresso, Vogue, Vanity Fair and many others, while her personal exhibitions have been held in Bologna, Lecce, Sao Paulo, Alghero and London.

First of all, I think it is about imprinting. My father was a photographer in the 70s-80s. Therefore I grew up in a permanent photography studio. I always took pictures, I had my first camera, a Polaroid, when I was 7, and from then on I documented all my live. I’ve got an album of almost every year from 1988 to 2005, and then digital photos arrived…I started transforming this passion into work in 2008 when I was first hired as a portraitist of musicians for album covers, promotions and the press. This is the branch I prefer but I also do reportages, events, books and much more.

I wouldn’t say that it imparts values, but it is surely a witness of every branch of my work. When I’m working with artists, I have to express their personality, and their art, who they are and what they do. Doing this I’m following the change of genres and tendencies that are continuously evolving. Instead, with social reportages I try to inform people about poor realities, often little known as, for example, two of my latest works: Eco de Femmes, about the condition of women in the rural Maghreb and about supporting projects implemented by the ONG Gvc. This contains a documentary video and a reportage/exhibition, with a team made up almost only of women: the project manager Stefania Piccinelli, the documentary director Carlotta Piccinini, the two photographers Malì Erotico e Sara Prestianni, and the executive producers Sara Prestianni and Alessandra Cesari, with the only exception of the photography director Salvo Lucchese. Whereas in 2015 we started a social communication campaign for the Auser Emilia Romagna (Association for active aging), with Nicola Rabbi from Bandiera Gialla, about the report about interdependence that is created between the assisted disabled and the voluntary who help the handicapped.

Essential, unavoidable, progress doesn’t exist without culture, and innovation doesn’t exist without creativity. Illiteracy leads to regression, like we are noticing nowadays, because illiteracy means not knowing, and what we don’t know scares people, fear changes people, and therefore we need to spread as much as possible every type of culture: culture of diversity, of tradition, artistic and literary culture, … Religion and politics are trying in every way to damage the education system of every country, in order to create more ignorant citizens, which are therefore easier to manipulate. That’s why we not only have to fight for maintaining our rights, but we must never stop learning, because culture is immense, almost infinite, and it is the only weapon against evil. Instead, creativity is the spark, the genius, and the depths of ourselves, which must be expressed. We are all artists, but many people have never discovered it like everyone is crazy, the only difference is self-control. So, we are all crazy artists, but many people are auto-repressed, often because of ignorance or fear, and that is where it reappears… the brake of humanity!

I’m very grateful to have digital; it allowed me to make a big step, to transform my passion into work. It permitted me to control every phase of the creative process and the easy diffusion of completed work, through Social Networks, which helped me also to become well known and to receive the biggest part of my jobs. Culture, like art, became enormously depersonalized with the arrival of new technologies, you can be a musician without knowing how to play an instrument, everyone can become a photographer or graphic designer by improvising, everything got democratized, easy and accessible, a little bit of quality got lost, but this is what we’ve lost to have more possibilities for everyone. But it is a pity to realize that the precious cultural instrument, which could be Internet, too often isn’t used by mass in order to enhance oneself and to learn.

A digital camera allows me to have immediately a preview of the picture and therefore to correct it instantly and, if I’m still not satisfied, I can use Photoshop for last adjustments of color, contrast and framing. Therefore, I would say yes, instead of influencing, I think that new technologies are means through which I express my creativity and realize my work.

In this historical moment, women are innovation, through emancipation of the last 50 years, despite the fact that regarding this we are still many years behind, women have acquired always more self-confidence and access to different professions, giving finally their contribution to science, culture and society. Unfortunately, important positions are still taken by men, but in the future, in a not sexist society, where women aren’t conditioned by men, I would like to see if it is really possible to offer us a better world… because until now it is a mystery, I like thinking that it will work …

Surely it offers a different type of sensibility and an approach, in my case, softer, less aggressive than in case of reportages, it could be a disadvantage while in portraits, on the other hand, it helps me to make people feel more comfortable. In some countries, where women are still considered the propriety of men, it is a big advantage because for men it is more difficult, or impossible sometimes, to talk or photograph a woman without negotiating with the man in her stead. Unfortunately, it happened that I was penalized as a woman, especially in certain musical sectors, but luckily that were isolated episodes.

I imagine it multicultural but, hopefully, much more laic; I would like to see more women in command positions, without misogyny and patriarchy, ecological and pacific but unfortunately we are making one step forward and two backwards. From a professional point of view, people need to get entrepreneurs of their own lives, that is inventors and promoters of their work and activity, and the branches which allow more operations are different services of high quality such as practical, artistic, handcrafted services. For the rest, there are machines, computers, or developing countries. Also the photography’s future seems always more nebulous, because of the big quantity of images that is created and put online every second. It is the youngest type of art, but it is also the one, which got to know a fast diffusion and transformation, it never stops evolving.

We could create laboratories of social communication to design and realize a public awareness campaign regarding the projects issues, its mission or whatever we want to communicate. Another idea could be a reportage of the activities of WISE4All and portraits of the team and participants, in order to diffuse and make the project known, through the press and the web.