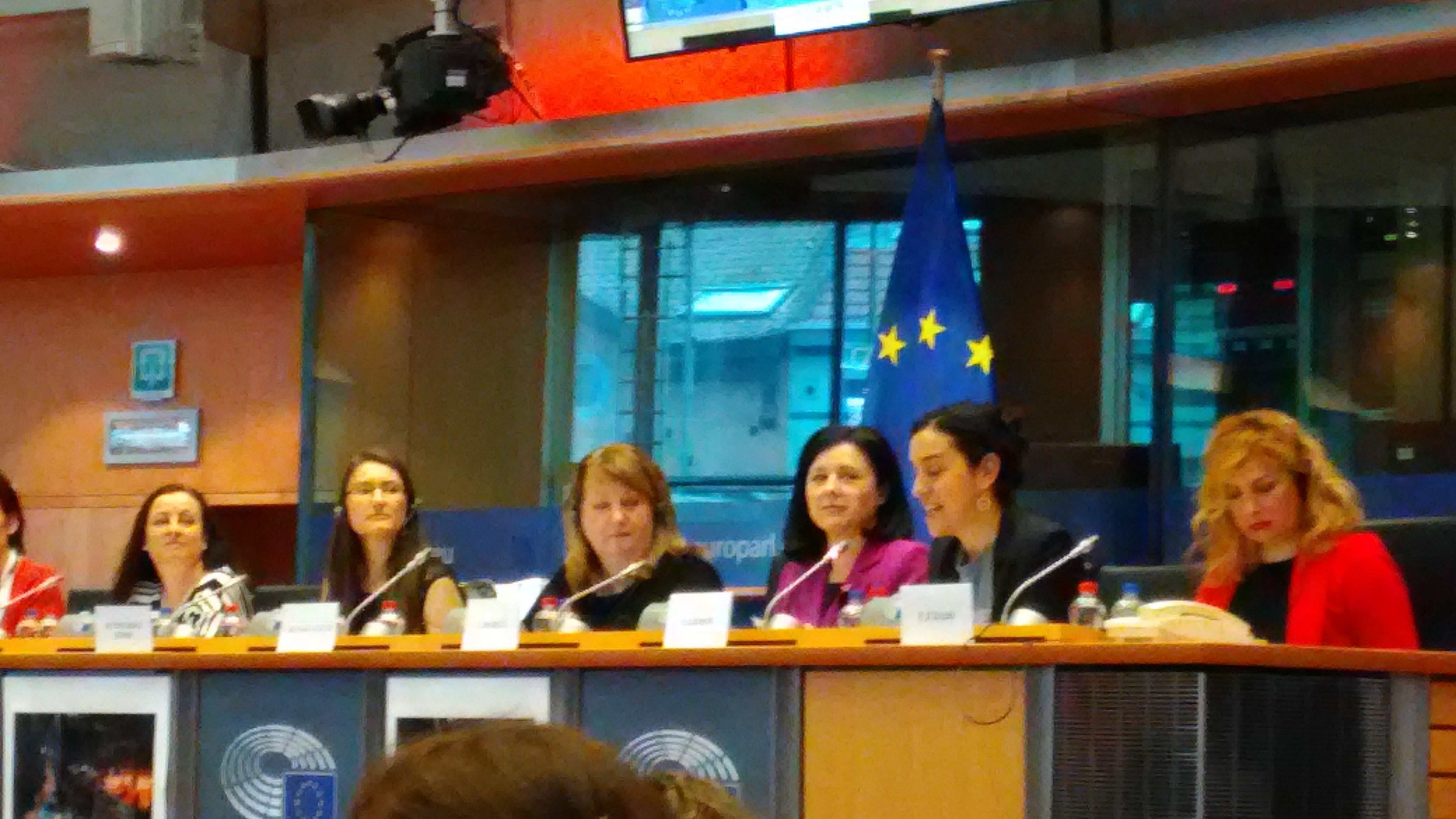 The 8th of March is a day full of celebrations.

We have decided to celebrate the International Women’s Day together with many colleagues who, like us, want to make the world a better, equal and fair place. We went to the European Parliament to attend the event “Empowering women and girls in media and ICT: Key for the future” organised by Directorate-General for Internal Policies of the Union – Directorate for Citizens’ Rights and Constitution al Affairs Secretariat of the Committee on Women’s Rights and Gender Equality in collaboration with the Directorate for Relations with National Parliaments.

The event was opened by Commissioner Jourovà who introduced the subject of the event: encouraging women participation in the ICT sector. She stated that even if efforts have been made with the Istanbul Convention there is still much to be done in terms of equity, women must collaborate to progress and achieve together gender equality. The access to new technologies is seen as a sign of women breakthroughs, as in the case of cybersecurity and the hostile contents on the web and on the possibility to take measures against this phenomenon through knowledge and culture.

We need to work to eliminate stereotypes by building positive models. “Artists and communicators play a key role in making the world change” Sarah Gavron claims, she is the director of the movie “Suffragette”. We have brought the cultural mistakes of our society in the media system, a shift in thinking and an increase in the number of women in the media sector are necessary. Today many women attend Faculties of communication but few of them wind up working in this sector. This has led to “men-run” communication models and examples, to the point that some of the EU countries have introduced laws to prevent sexism in the media. The speech of Pilar Jurado has followed, she is an artist and founder of the WOMENMADFEST, an itinerant festival born in Spain to combat gender-based violence. Her speech made clear that in the art world is very difficult to find women to the top and, as a consequence, women thinking remains unheeded. Exclusion is still one of the major risks of digitalization.

It is an hardly reassuring context in which there is still trust and hunger for change trying to preserve the historical memory and not repeating past mistakes. Being digitalization the trigger for the revolutionary transformation, it can also serve the purpose to find possible remedies to the abovementioned risk.

After the introduction, the discussion was set to focus on three panels “Women shaping media”, “Empowering women and girls through digital inclusion” and “Women’s movements on the rise: advancing equality in the digital age”.

The first panel on “Women Shaping Media” dealt with the media used as facilitator to create a more equal society. With the current digital revolution, work-life balance is crucial more than ever. The panel addressed also the role of media in creating an environment where biases and stereotypes may arise, investing in women in digital is key for reversing this trend.

In the panel of “Empowering women and girls through digital inclusion” Commissioner Gabriel stated that women are the driving force behind the European economy and that there is insufficient role models for women and girls who want to engage in ICT. She also stated that the active participation of women in ICT can be achieved, for instance, by combating stereotypes and prejudices and promoting skills, education and digital entrepreneurship.

The final panel on “Women’s movements on the rise: advancing equality in the digital age” addressed the need to have positive European role models and a digital activism to encourage the participation of women in ICT.

It was a great day worth to highlight the great work that is left to be done to build a fair society, but we can do it all together starting today.

Happy future to all women!!