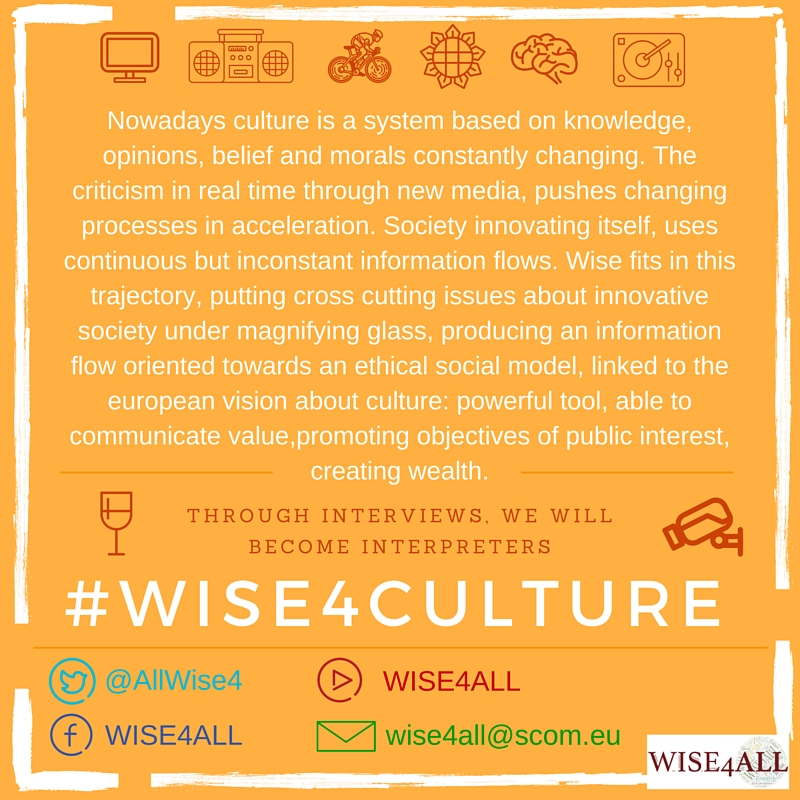 #WISE4Culture in a changing society

“The Commission Communication entitled “Europe 2020 – A strategy for smart, sustainable and inclusive growth” (the “Europe 2020 Strategy”) defines a approach that aims to turn the European Union into a smart, sustainable and inclusive economy delivering high levels of employment, productivity and social cohesion. In that communication, the Commission remarked that the European Union needs to provide more attractive framework conditions for innovation and creativity. Regarding this, cultural and creative sectors are a source of innovative ideas that can be turned into products and services creating growth and jobs and helping societal changes. Moreover, excellence and competitiveness in those sectors are primarily the result of efforts on the part of artists, creators and professionals that need to be promoted. For that purpose, access to finance for the cultural and creative sectors should be improved” REGULATION (EU) No 1295/2013 OF THE EUROPEAN PARLIAMENT AND OF THE COUNCIL of 11 December 2013, cit. n.7

Creativity and innovation represent a truly “new start for Europe” to relaunch economy and society.
Culture and Creative Industries (CCIs) have proved to be resilient to the crisis with innovative solution that contributes  to growth and jobs. In this context, significant experiences have been carried out at the European, the national and the local level, where, to a large extent, CCIs have been established and developed. But culture is more than Creative Industries, Culture influences today and tomorrow and it is something that we choose to bring with us. In the context of a social innovation study, Culture deserves a more profound analysis. Before investigating the nexus between social innovation and culture it’s firstly important to define the two concepts. Wikipedia, an example of a cultural phenomenon in a changing society,  helps us: “Culture is, in the words of E.B. Tylor, “that complex whole which includes knowledge, belief, art, morals, law, custom and any other capabilities and habits acquired by man as a member of society.”[1] […….] The modern term “culture” is based on a term used by the Ancient Roman orator Cicero in his Tusculanae Disputationes, in which he wrote about a cultivation of the soul or “cultura animi”,[5] using an agricultural metaphor for the development of a philosophical soul, understood teleologically as the highest possible ideal for human development. Samuel Pufendorf took over this metaphor in a modern context, meaning something similar, but no longer assuming that philosophy was man’s natural perfection. His use, and that of many writers after him “refers to all the ways in which human beings overcome their original barbarism, and through artifice, become fully human”.[6] Philosopher Edward S. Casey (1996) describes: “The very word culture meant “place tilled” in Middle English, and the same word goes back to Latin colere, “to inhabit, care for, till, worship” and cultus, “A cult, especially a religious one.” To be cultural, to have a culture, is to inhabit a place sufficiently intensely to cultivate it — to be responsible for it, to respond to it, to attend to it caringly.”[7]” Cit. https://it.wikipedia.org/wiki/Cultura

Culture is the general knowledge of the individual and therefore always an expression of social issues. Privileged place of local and global “knowledge”, symbol of the knowledge of the time (science, technology, politics, art, information, historical interpretation of events), but also a thing able to  influence future phenomena (costumes, guidelines of the different populations). One of the first forms of culture was the “cultivation of fields”. Since then, discoveries, myths, traditions, beliefs, fashions, styles and ideologies have gone through the history of man influencing the future generation. The ongoing change here and now, just as the previous changes, are inter-connected
cultural processes. In a changing society, they also change the ways of doing culture, to produce, to finance, to participate and to define the very concept of culture: new technologies, new processes and social patterns, movements from below are mixed to undertake new knowledge as crowdsourcing, opensourcing, OpenKnowledge, Mooc (massive open online courses) etc. Tools that let the individual combine his/her own experiences which, thanks to the network,become collective experiences, drawing all the power that can be drawn from the participation, by comparison with the community. “The digital shift is having a massive impact on how cultural and creative goods and services are made, disseminated, accessed, consumed and monetised. While the need to seek a new balance between the increasing accessibility of cultural and creative works, fair remuneration of artists and creators and the emergence of new business models is recognised, the changes resulting from the digital shift offer wide opportunities for the European cultural and creative sectors and for European society in general. Lower distribution costs, new distribution channels, the potential for new and for increased audiences and new opportunities for niche products can facilitate access and increase circulation of cultural and creative works worldwide. In order to fully use those opportunities and adapt them to the context of the digital shift and globalisation, the cultural and creative sectors need to develop new skills and require greater access to finance in order to upgrade equipment, develop new production and distribution methods and adapt their business models.” Cit.13 REGULATION (EU) No 1295/2013 OF THE EUROPEAN PARLIAMENT AND OF THE COUNCIL of 11 December 2013

#WISE4Culture wants to be an area of investigation of the cultural ferment in progress. A place for co-creation that brings together performers of current liquid culture, moving between communities and territories, giving voice to different thoughts, supporting the emerging of knowledge and present and future traditions. As an observer / producer of a new cultural change, #WISE4Culture aims will be to search examples of new emerging culture and creativity to social innovation.